She’s championed women in the boardroom and the bedroom, and now, at the age of 85, Shirley Conran – author, entrepreneur, all-round ‘Superwoman – has turned her focus on the classroom. She tells Peter Stanford why girls’ numeracy struggles don’t add up

‘What do you want to earn money at?’ Though 85, Shirley Conran is far too savvy to ask anything as old-fashioned as, ‘What do you want to be when you grown up?’ The bestselling novelist and self-proclaimed Superwoman-turned-maths education campaigner is sitting in the middle of a circle of 13- and 14-year-olds at Langley Park School for Girls, a non-selective academy in Bromley, south-east London.

She is here to do research – in her own inimitable fashion. So, no PowerPoint or flip charts. Instead, as she talks, she hands round a box of expensive chocolates, and peppers questions she really wants answered, about the links between maths, money and life expectations – the holy trinity, according to her campaigning organisation the Maths Anxiety Trust – with others that show the girls she is on their wavelength. “What do you talk about with boys when you are not talking about sex,” she drops casually into the conversation to blushes and squeals. “At least, that is what I presume boys still want to talk about.”

It could be a confessional gathering of old friends, though Conran, a mother of two (product designer Sebastian and fashion designer Jasper) is plenty old enough to be their grandmother. “I have such a special affinity with girls on the edge of adulthood,” she reflects later, in her quiet purr. “They’re so hopeful about life, you just pray it turns out as they expect, while you know perfectly well that it can’t possibly.”

Kiera, one of the circle, starts elaborating about how she wants to be a cricketer and “part-time accountant”. Conran’s blue eyes light up. She couldn’t have scripted it better. “Well,” she says, “if you achieve your ambition to be a successful cricketer, you’ll have to be good at maths so you can keep an eye on every penny.”

“Don’t banks do that for you?” suggests Jess, whose ambitions are more directed towards the stage. Conran shakes her well-coiffed blonde bob. “Don’t think banks don’t make mistakes,” she counsels. “You need maths so you can check up on other people.”

Our national failings in maths are well known, with as many as one in five of us lacking even basic numeracy skills. But the particular focus of Conran’s crusade is how disproportionately this collective deficit has an impact on women and their prospects. As the Maths Anxiety Trust’s strapline puts it, “Maths is a feminist issue.”

Analysis of the 2014 GCSE results shows that girls achieved more A* and A grades than boys in all the major subjects except maths. What’s more, twice as many boys as girls took maths and further maths A Level, while university maths courses remain predominantly male.

“It’s a problem that does not exist so much outside Britain,” laments Conran. “At least that is what the Department for Education tells me.” Since starting her campaign 14 years ago, she has had countless dealings with the Whitehall mandarins, and is currently an adviser to the previous Education Secretary Nicky Morgan on encouraging more girls to take on Stem (Science, Technology, Engineering and Mathematics) subjects.

“I’m a terrific fan of Nicky,” she says, “but when I ask her officials the cause of the maths problem with girls, they don’t know. So I decided to find out.”

It is, at first glance, an unlikely task for the ex-wife of the designer, restaurateur and retailer Sir Terence Conran, who made her name – and, she is quick to stress, her own money – after their divorce, with the 1975 feminist bible Superwoman and its catchphrase “Life’s too short to stuff a mushroom”, then a series of novels, including the raunchy Lace, dubbed “the feminist bonkbuster”, later a celebrated 1980s TV mini-series. But for Conran herself, it is all of a piece. “I’ve been in the business of helping women for about 50 years and this is just one small part of it.”

Most of us might think that to make any real impact with a maths-education campaign, we would need to be expert at maths ourselves. But Conran likes to come at things from the outside. “I was in no way good at maths at school,” she recalls. She grew up in London and attended the elite St Paul’s Girl School before going on to art schools in Portsmouth then Chelsea. “I was a B, and at St Paul’s that was very low.” 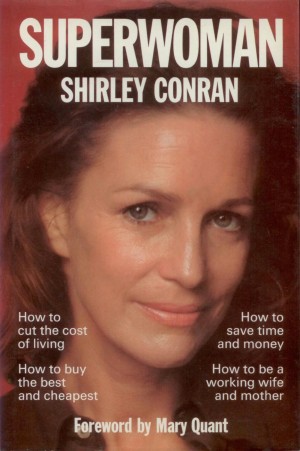 Conran’s 1975 feminist bible Superwoman, whose catchphrase was: ‘Life’s too short to stuff a mushroom’

So where does she get her self-confidence in tackling an issue that seems to confound so many students, let alone experts? “Well, it’s back to my St Paul’s training and, in a way, growing up during the War: ‘Nobody’s doing it – well, you do it.’ I generally start when a situation presents itself to me.”

In the case of maths education, that situation arose as she was working on a book to encourage women to get on in business. “I was going to put in a chapter on maths and went to a bookshop to find the best books to crib. They were all terrible, condescending, and didn’t make things clear. I did my research, and when I was sure no one was doing anything [about the situation], I said to myself, ‘Well, Shirley, you’d better give it a go.'”

It was the same logic, she points out, that in the 1990s prompted her to set up the Work-Life Balance Trust, and sign up three million workers to the cause, long before ministers started championing flexible working. Conran likes to see herself as a catalyst. Once she has done enough to get something taken up with gusto by government, she fades into the background.

There is, though, nothing faded about her as she energetically hurries along the corridors of Langley Park. Her energy is remarkable, especially given that she suffers from ME, which periodically lays her low for weeks, sometimes months. “I did retire,” she confesses, “when I was 67, but only for three weeks because I can’t see any reason to retire as long as you are OK on your feet and in your brain.”

What also sets Conran apart is that she funds her causes herself. Most of her first decade tackling girls’ underperformance at maths was spent preparing Money Stuff, her lavishly illustrated, user-friendly interactive maths course, designed to appeal specifically to her target audience with its underlying theme that maths is the key to money and hence independent, fulfilled lives.

Launched in 2013, Money Stuff has been such a success that it is now available in various languages around the globe. Conran says she sank a “substantial six-figure sum” into it. And since it is available for nothing online, she won’t see a penny back. “Look, I’m 83. What else am I going to spend money on? My funds are not unlimited, but it is a subject I feel passionately about.”

As a stickler for detail, she insists on thorough market-testing of everything, which is why Money Stuff took 10 years to appear – and which explains her presence at Langley Park. Its girls’ track record in maths, says head Dr Anne Hudson, is outstanding compared with the national average, and it has been achieved by precisely the sort of innovative measures Conran is advocating.

On the walls outside the maths room are panels showing how maths leads to prestigious careers – including in engineering, where Britain lags behind nearly every other developed country in terms of female recruitment. In the classroom are posters that turn the often-heard girls’ complaint, “When will I ever needs maths?” into a rallying cry. And the school’s own in-house “careers academy” hammers home the message that, as Dr Hudson puts it bluntly, “You can’t do anything without maths.” 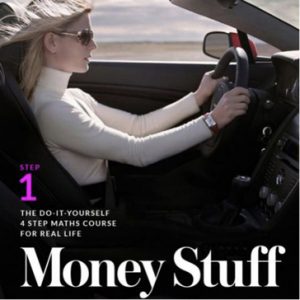 The underlying theme of Money Stuff, Conran’s lavishly illustrated, user-friendly interactive maths course, is that maths is the key to money and hence independent, fulfilled lives

The underlying theme of Money Stuff, Conran’s lavishly illustrated, user-friendly interactive maths course, is that maths is the key to money and hence independent, fulfilled lives

So committed to shattering the myth that maths is “not a girls’ subject” is Langley Park that it has just got the go-ahead to set up a primary school on site that will specialise in maths. “We recognise,” says the head, “that there is a mindset in society that we need to tackle, which causes women and girls to find maths frightening.”

Talk of a “fear factor” brings us back to the question Conran has spent the past decade trying to answer. Why do so many girls decide maths is not for them? Often, I suggest, it is blamed on poor teaching. “I’m very pro-teachers,” Conran corrects me, “but not pro the way maths is being taught. Quite frankly, the people in charge of our maths education are responsible for the appalling mess it is in. The curriculum hasn’t really altered since 1870, as far as I can see, and maths textbooks remain slanted towards boys.”

But the real problem, she says, is much wider. “As I have been working on maths, there are all sorts of things I have seen along the way, like the mothers who say, ‘I was never any good at maths and that’s why my Pamela isn’t.’ When I challenge them, I just get reproachful looks.”

Typically undaunted, she commissioned a report, “The Fear Factor: Maths Anxiety in Girls and Women”, from the anthropologist Dr Samantha Callan, of the Centre for Social Justice. Its conclusion – announced at the House of Lords by Nicky Morgan in September – is that there is a “maths myth” that ability in the subject is “innately male”.

It all comes back, explain Conran, to the patriarchy she has spent her life battling. “There is no reason why everyone shouldn’t be able to do maths, because maths is easy. I normally never use the word ‘easy’, because nearly always for someone it isn’t easy. But maths is one of the easiest subjects because it is logical. And children are logical. It’s just that girls in particular get screwed up about it. It all comes down to entrenched attitudes. Maths anxiety in girls is at base patriarchal, even if it is often mothers passing it on to daughters.”

So what should they be telling their female offspring instead? “That they can’t just sit through maths lessons until they’ve finished studying and then forget about it. That there are two supports they will need in life: one is their bra, the other is maths. The first day they leave school is the first day they’ll need maths.”

It’s quite a rallying cry. Getting it across – the Callan report suggests a major ad campaign – will be a big undertaking, accepts Conran, and one better suited to the government’s purse than her own. The moment is approaching, she says, when she will hand over the baton to ministers. But not quite yet, she adds, as she returns to her gaggle of Year 9s and the box of chocolates.